Last December (2012), Tom Preston-Werner granted me push & pull access to mojombo/jekyll. I had written a letter to Tom about the future of Jekyll and after a bit of persistence on my part, he relented:

After a somewhat lengthy (and amusing) conversation via Skype, I knew what Tom's priorities were for the project and where I could help. I started off trimming down the number of open issues. At the time, they numbered just over 300. After a quick visit to Buffalo to tackle some issues with Nick Quaranto at a Buffalo OpenHack meetup at CoworkBuffalo, we were down to fewer than 200 open issues. I continued to work through them (much to my parents' dismay) all through Winter Break. I was making good progress in the triage process: I knew what many of the problems were with v0.12.1 and was formulating ideas about how we might go about fixing them.

In January, I flew out to San Francisco to visit my sister for a week. I setup a meeting with Tom to talk more about Jekyll and a plan for moving forward to a v1.0.0 release. After about an hour or so at GitHub's office in SoMa, talking through various PR's, Tom said I could start merging pull requests.

Consultation with Tom was challenging (he runs a multi-million dollar company after all), as it was increasingly difficult for him to find time for Jekyll. Despite announcing that he was going to commit some of his "20% time" to Jekyll, he eventually abandoned that as impractical. As time went on, I received fewer replies to my emails and eventually stopped sending anything that didn't absolutely require Tom's input.

In March, I knew I needed more help. Tom wasn't able to give much time and I was trying to tackle this project alone. I had noticed that Matt Rogers shared my vision for Jekyll, so I asked Tom to add him on as a contributor to the repo. By v1.0.3, he had started merging pull requests like a BAW$ and was the sanity to my ridiculously-obsessed, inexperienced mind. Since Matt joined, I haven't really heard much from Tom. I write the occasional email and get the occasional reply but he's essentially phased out of the normal development of Jekyll. Matt & I have essentially taken over the project altogether.

By May, we were ready to ship v1.0.0. With the help of all the amazing contributors, Matt, and my many mentors along the way, I finally ran rake release for 1.0. The project was ours.

Since realizing that this product has few constraints outside of those I've constructed for it in my mind (no one is going to tell me, "No, you may not implement that feature or add that enhancement" without a valid argument as to my solution's invalidity), I've been thinking about what it means to take over someone else's project. Jekyll is 5 years old. I wasn't there in 2008 when it was first born as autoblog. Jekyll has changed a lot, as has its vision and purpose. It's used by lots of people now, whether via GitHub Pages or locally.

Mentoring on the part of the original owner/previous maintainer(s) is exceedingly significant in the development of this critical lens. I am so grateful that I was able to meet up with Tom back in January and to have some amount of input from him as I understood what the project should be.

It would be ill-advised to take over someone else's project without a partner. Once Matt joined the team, Tom was able to step back into a much lesser role. If I had tried to do what I did without any guidance (or at least sanity checks), Jekyll v1.0.0 would have been a complete shit-show.

Trust in the community must also be earned. If people highly doubted my ability to handle Jekyll, Tom would have likely removed me and found a replacement. I argued a lot and got into some pretty heated debates at the beginning. There were a couple people who didn't share the vision that I had inherited from Tom and stopped contributing to the project altogether. I feel like we now have a pretty great community around Jekyll and are able to help each other out and share cool plugins and sites that we made for/with Jekyll.

Taking over someone else's open-source project was new terrain for me in December, and still is today. It can be successful with the right amount of mentoring and gradual removal of trusted feedback by the previous maintainer(s).

With some old projects that are brought back to life by the passing of the torch, the new maintainers are able to experience the added bonus of feeling like Frankenstein, which, I will say, is a pretty cool feeling. 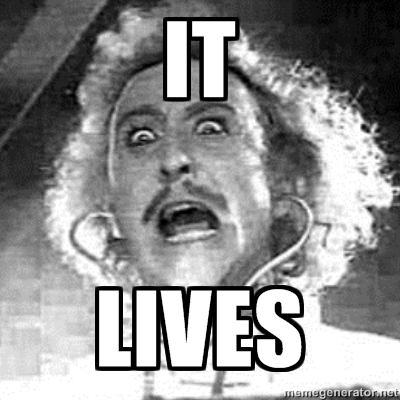